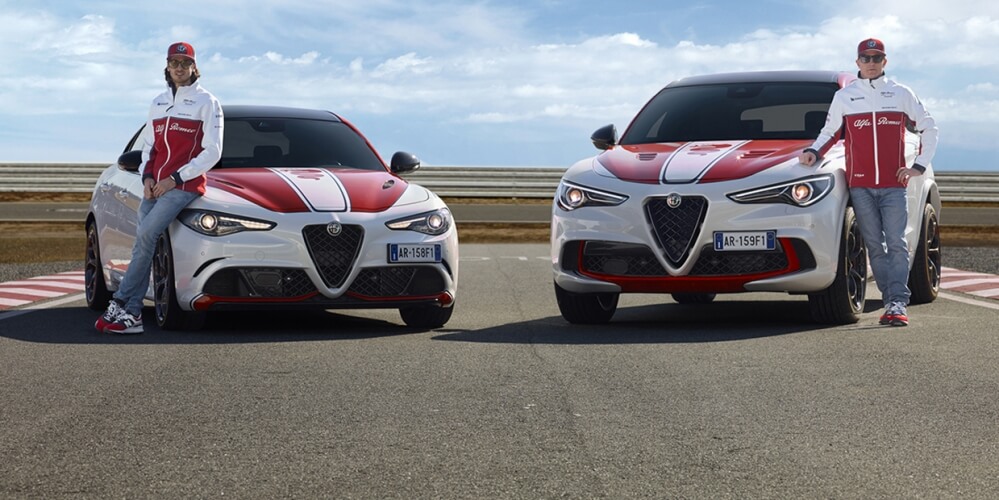 Alfa Romeo cars have been delighting motorists for over a century with their beauty, Italian style, which evokes all the performance, technology and driving pleasure just waiting to be unleashed at a turn of the ignition key.

This year, visitors to the Geneva International Motor Show will clearly perceive that the brand has evolved even further, in many different directions.

Nothing could have expressed the centrality of the most extreme performance to the Alfa Romeo DNA better than the brand's return to Formula 1, and in the 2019 season the team will be competing at motorsports' highest level under the "Alfa Romeo Racing" name, lining up an Italian driver, Antonio Giovinazzi, alongside Kimi Räikkönen, former 2007 world champion.

The Geneva stand will display the team's car, representing the unbreakable bond with the racetrack that underlies the Giulia Quadrifoglio and Stelvio Quadrifoglio "Alfa Romeo Racing" limited editions, with their own specific livery.

Evolution, too, in the area of exclusiveness, with the return of the historic "Turismo Internazionale" name, awarded to Alfa Romeo Stelvio in the new Ti trim, representing the utmost in sportiness.

The true stars of the display area will undoubtedly be the Giulia Quadrifoglio and Stelvio Quadrifoglio "Alfa Romeo Racing" special series, in limited edition.

The "Alfa Romeo Racing" limited edition celebrates Alfa Romeo's ever-deepening participation and involvement in the Formula 1 world championship, in partnership with Sauber. From this year, the team has acquired the new official name of "Alfa Romeo Racing", with the highly significant add-on: "since 1910".

The best possible way of proudly asserting that the history of Alfa Romeo, founded on 24 June 1910, is firmly rooted in motorsports. Just one year after it was founded, Alfa Romeo made its debut in an official competition, winning the first Regularity Race in Modena. Since then, its sporting legend has been a string of victories and top-three finishes in many international championships, including Formula 1.

The synergy between Sauber and Alfa Romeo, Title Sponsor since 2018, drove the progression of the team which ended the past season in the eighth place. Today, the technical and commercial bonds between the two partners are being consolidated even further under the same management and ownership. In Alfa Romeo Racing, the two partners share the same goal to achieve ambitious results confidently aiming at winning races.

Visitors to the Geneva International Motor Show will be able to admire the team's car, to be driven by former world champion Kimi Räikkönen and young Italian driver Antonio Giovinazzi. The latter's presence is a source of national pride, because it is eight years since an Italian driver has regularly appeared in Formula 1. Next to the Formula 1 car, the Alfa Romeo Quadrifoglio "Alfa Romeo Racing" cars have exactly the same livery.

This special edition with an exclusive paintwork, as a tribute to the Alfa Romeo Racing C38, is packed with unique stylistic details, such as Sparco racing seats with red stitching and carbon shell structure, the Mopar® automatic transmission knob with carbon insert, and the leather and Alcantara steering wheel, also with carbon inserts. A special celebratory badge with the Alfa Romeo Racing logo makes a statement inside.

The excitement of the racetrack is expressed by technical details such as the exposed carbon fibre roof on the Giulia, the burnished alloy wheels (19" on the Giulia and 20" on the Stelvio), the red brake callipers. Furthermore, these special editions are equipped with exclusive Akrapovič titanium exhaust to emphasise the deep and bold sound of the 2.9 V6 Bi-Turbo engine, which was specifically tuned by Alfa Romeo engineers to increase power output.

The adoption of titanium exhaust, braking system with carbon-ceramic discs and Sparco seats with carbon shell also makes the car much lighter than its normal production counterparts. Carbon is widely used, also on the mirror caps, the "V" insert in the front trefoil, ###em

Both "Alfa Romeo Racing" cars are also complete with tinted windows, Adaptive Cruise Control, the Harman Kardon premium audio package, and the AlfaTM Connect 3D Nav by Mopar infotainment system with 8.8'' screen, Apple CarPlayTM, Android AutoTM and DAB radio. Under the skin is the epitome of technical design and performance characteristic of all models with the legendary Quadrifoglio four-leaf-clover badge that has been the symbol of Alfa Romeo since 1923.

For example, on Stelvio, for the first time, the 2.9 V6 Bi-Turbo powerplant is combined with the innovative Q4 all-wheel drive system, with its guarantees of unbeatable performance, traction, driving pleasure and safety in all situations. Both cars also incorporate AlfaTM Chassis Domain Control, which coordinates all the on-board electronic systems, to deliver the best performance and the utmost driving pleasure at all times.

This ensures the optimal transfer of power to the ground even when the car is pushed to its dynamic limits. So driving is safe and fun without ever running up against an invasive stability control system. The 8-speed ZF automatic transmission, supplied as standard, is specifically calibrated to shift in just 150 milliseconds in Race mode.

The transmission has a lock-up clutch to give the driver a powerful, precise feeling of in-gear acceleration. Depending on the DNA mode set, new automatic transmission optimises fluidity, comfort and ease of driving in all environments, including around town, and further improves fuel efficiency and cuts CO2 emissions.

So the excellence on offer is not just in performance: both the Alfa Romeo sports SUV and the sedan are also incredibly efficient in terms of emission and fuel efficiency, thanks also to their electronically controlled cylinder deactivation system and the sailing function, available in Advanced Efficiency driving mode. Last but not least, to maximise the driving experience, they are both equipped with paddle shifters machined from solid aluminium which are integral with the steering column.

The Geneva stand also proudly displays a Stelvio car equipped with the 280 HP 2.0 Turbo Petrol powerplant, paired with an 8-speed automatic transmission and Q4 all-wheel drive. The engine is a 4-cylinder unit built entirely in aluminium with carbon drive shaft.

The Alfa Romeo Stelvio with 2.0 280 HP Turbo Petrol engine (peak torque of 400 Nm at 2,250 rpm) is best in class in terms of acceleration, powering from 0 to 100 km/h in just 5.7 seconds. It has a top speed of 230 km/h. The model on display proudly bears the historic Ti, "Turismo Internazionale" acronym, always awarded to the loveliest, most high-tech Alfa Romeos, and its lavish contents are sure to meet the highest expectations.

The stylistic personalisation of the SUV on show is truly unique: the Misano Blue livery is combined with the new burnished rear light clusters and luxurious trims, with widespread use of carbon. Both the "V" of the front cloverleaf and the mirror cars are in this material. There is a shift towards shades of black as well as other content such as the powerful 20" alloy wheels combined with the yellow sports brake callipers, the exterior window frames and tailpipes in gloss black, and the dark "Stelvio" and" Q4" badges and privacy glazing.